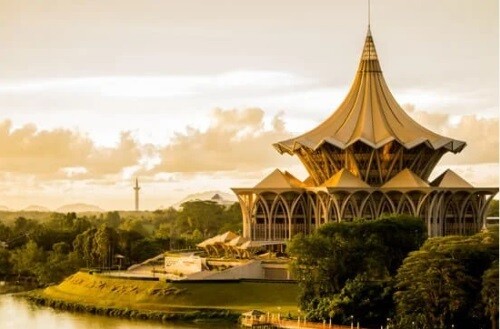 DAY 01: ARRIVE KUCHING (-)
Upon arrival at Kuching International Airport, meet and greet by our friendly representative and proceed for KUCHING CITY & SHOPPING TOUR. Kuching, the Capital of Sarawak, is a cosmopolitan city and this is reflected in the faces on the street. Its city centre is well preserved with ornate Chinese Temples, The Astana, City Tower, and many fine examples of colonialstyle architecture, a beautiful waterfront and a number of interesting museums such as Cat Museum. Other places of interest include the famous landmark of the City, the New DUN, The Golden Bridge, The Cat Monument, Market, Main Bazaar, China Town, Old State Mosque & etc. Proceed to HOMEMADE KEK LAPIS. The Sarawak layer cake is a wellloved local delicacy that is laborious and intricate to make but so delicious to eat. These colourful cakes also make great gifts to friends. Kuching is a good destination to shop for souvenir such as woodcarvings, “Pua Kumbu” with native design, Pepper products, Sarawak Bird’s Nest and Local Product are also one of the famous souvenirs which can be found in Kuching. After tour, transfer to hotel for check in and overnight.

DAY 02: WILDLIFE & NATURE WATCHING CRUISE (B)
After breakfast at hotel and free at your own leisure. In the early evening, will proceed to the Wildlife & Nature Watching Cruise. This tour takes you around the rivers of the Santubong Peninsular, offering you the chance of seeing some of Sarawak’s fascinating wildlife. The cruise starts at the Sarawak Boat Club. From there your boat cruises to the mouth of the Santubong River, where Irrawaddy dolphins are often spotted. Your boat then roams the mangrove lined rivers looking for wildlife. As the light starts to fade we go in search of the bizarre looking proboscis monkey. Small groups are often seen in the treetops at the waters edge, settling down for the night. As dusk arrives we search for fireflies and crocodiles. Crocodiles are often seen on the mud banks and brightly shining crocodile eyes can be spotted when a torch light is passed over the river. After searching for crocodiles your boat proceeds further up river where fireflies gather at night. Watch the fireflies move around the branches of the mangroves, momentarily lighting up the night sky. After enjoying a firefly light show you return to the jetty.

DAY 03: ANNAH RAIS BIDAYU LONGHOUSE (B)
Breakfast at hotel. Pick up at hotel lobby and transfer to the tour of Annah Rais Bidayu Longhouse. Annah Rais is one of the most famous Bidayuh longhouse in Sarawak, which located about 100 km east from Kuching City. The excursion will take about one and a half-hour on the road. During your visit, you will also be able to view the villagers with their own daily routine like rice pounding and winnowing, basket and mat weaving and bamboo carving. You will also see the most unique and important structure, the ‘Baruk’ or the head house, which situated in front of the longhouse. Villagers once used this as a fort to protect the whole village from being attack. Inside the ‘Baruk’, you will be able to view the real human skulls hanging around the fire place in the middle and the also their sacred war drum.

DAY 04: DEPARTURE KUCHING (B)
Breakfast at hotel. Free at leisure time for you to explore more or do last minute shopping for local handicraft and souvenirs until transfer to Miri airport for departure flight.